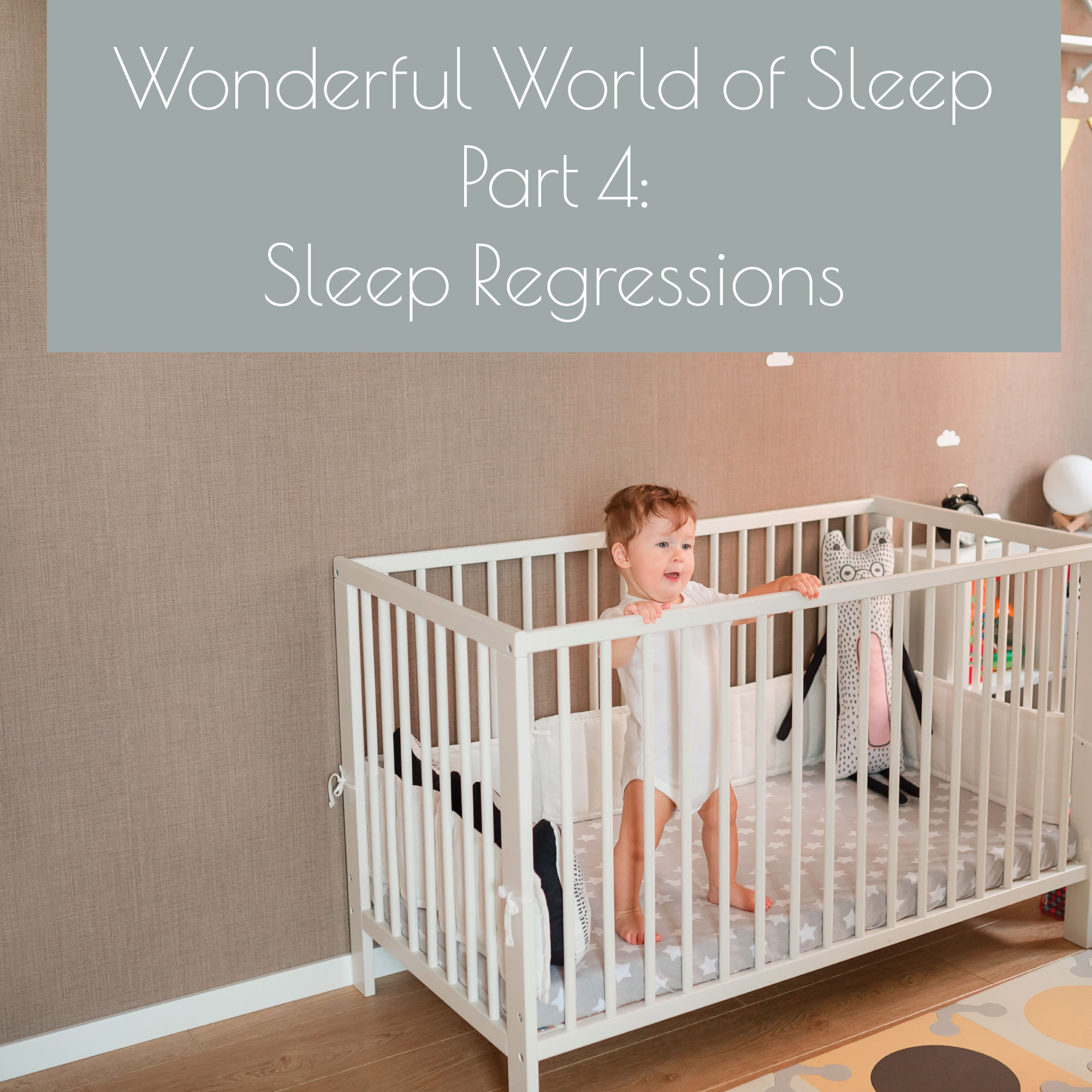 We’ve covered a lot of topics during our Wonderful World of Sleep series (Part 1, Part 2, Part 3), for our final topic I’m going to discuss the wonderfully mysterious sleep regression. In all honesty, its not really that mysterious at all…but it does tend to feel like it happens out of nowhere.

So what is a Sleep Regression? A sleep regression is a little hiccup in you child’s sleep patterns. They may wake up more during the night, have a harder time falling asleep and most likely, wake you up. The good news – it’s temporary.

The annoying news? It happens more than once during your child’s development.

Why do they happen?

These regressions typically occur when your child is busy mastering some big developmental milestone. Think of how much they are focusing on learning that new skill. They want to practice it ALL THE TIME. Pulling to stand? Your child is pulling to stand on EVERYTHING.

And guess what they’ve discovered? They can even pull to stand in their crib. Think of all of the practice they are going to get testing out this new skill in their crib. Sleep can wait…there’s so much out there to do, so many new things to see.

I know it sounds daunting and overwhelming. Again, remember that good news. Its temporary.

When do the regressions occur?

These regressions tend to occur around specific milestones, which happen to line up with certain age ranges. As a disclaimer, these ranges are based on typical gestational development, meaning your child was born within 38-42 weeks gestation. If your child was premature, you’ll need to do a little calculation to find your child’s adjusted age, which can then give you a better idea of when these regressions MAY happen for your child. (This website has a nifty little adjusted age calculator to help you figure out your child’s adjusted age if they were born prematurely).

On average, sleep regressions tend to occur during the following months:

If you think about child development, there are A LOT of major milestones that happen around the above times. Here are some examples of why the regressions may be occurring:

Regressions can occur anytime a child is teething, experiencing a new activity or new routine (starting daycare/school), traveling or illness.

What are signs of a sleep regression?

Typical signs of sleep regressions include more frequent waking at night, trouble falling to sleep or putting themselves back to sleep, increase in fussiness and the sudden resistance to napping. If you are seeing this with your child, the first thing I want you to do is think about IF they are in the middle of learning a new skill. Are they starting to roll over? Do they seem to be practicing this new skill OVER and OVER again? Does your child seem increasingly more interested in their surroundings?

If so, they are probably going to experience some form of sleep difficulty or regression. But DON’T panic.

You guys are going to laugh…cuz you’ve heard me say it a million times before. Stick to your routine. Be consistent. Consistency is key!

Stick to your normal bedtime routines. If you’re experiencing your first sleep regression and haven’t established a bedtime routine yet, now may be a good time to start. If you’ve already sleep trained, remember what you did and keep doing it (remember in my previous post I said you’d be sleep training throughout your kid’s childhood). As much as you can, try to allow your child to self soothe, so they can learn – again – that they can put themselves back to sleep.

If you can, try not to make a big deal out of these regressions. If/when you do enter their room to help soothe them, don’t make a big production out of it. Remain calm, keep the interaction minimal. The goal is to get them calm and back to sleep.

This too shall pass

Yes, sleep regressions are annoying and of course they seem to happen JUST when you’ve got everything settled, but that’s life for you, right? Just when you feel like you’ve got a handle on one thing, something else happens just to make sure you’re paying attention 😉 You’ve got this!

let's figure this out together

Hop on our mailing list for expert insight and tried-and-true advice to help you parent in a way that works for you and your family.

Cookies
This website uses cookies to enhance user experience and to analyze performance and traffic on our website. We also share information about your use of our site with our social media, advertising and analytics partners. If you think that's ok, just click "Accept all". You can also choose what kind of cookies you want by clicking "Settings". Our Cookie Policy
Settings Accept all
Cookies
When you visit our website, we store cookies on your browser to collect information. The information collected might relate to you, your preferences or your device, and is mostly used to make the site work as you expect it to and to provide a more personalized web experience. However, you can choose not to allow certain types of cookies, which may impact your experience of the site and the services we are able to offer. Click on the different category headings to find out more and change our default settings according to your preference. You cannot opt-out of our Strictly Necessary Cookies as they are deployed in order to ensure the proper functioning of our website (such as prompting the cookie banner and remembering your settings, to log into your account, to redirect you when you log out, etc.). For more information about the First and Third Party Cookies used please follow this link. Our Cookie Policy
Save Accept all